It's a common refrain: if muslims are so opposed to terrorism, why don't they do something about it? Let's have a look at some of what's going on -- stuff the media is studiously ignoring.

First, a bit of context

Like Christianity, Islam is made up of different branches, schools of thought, sects and outright cults. If you see yourself as a Christian, imagine sitting down for tea with Martin Luther King, Brian Tamaki, Cardinal Pell, Joseph Kony and Cliff Richard.

More to the point, consider Anders Breivik's claim that he is "100 percent Christian"? His stated goal was to save Christian Europe. Both he and Brenton Tarrant saw themselves as Templars.

No doubt you are thinking that some of the abovementioned people are not 'real' Christians. People who believe in Christ want nothing more than peace. But there is always some argumentative sod (in this case it's  me) who will reel off names:

All of these murderous groups claim(ed) to be marching under a Christian banner. If you're a Christian yourself, you'll be starting to feel a bit exasperated about all this. "NO! They are not real Christians!!"

Islam is not being heard

Every time a deranged "muslim" terrorist carries out an attack, the Islamic community makes public statements and issues media releases decrying the event. You will find hundreds of these statements online. After all, by far the majority of casualties are muslim. However, you'll almost never hear these denouncements mentioned in the mainstream media.

Here are some other stories you may have missed:

These stories should come as no surprise. After all, the vast majority of victims of terrorist extremism are Muslim (more). It would be pretty weird if they did not want the violence to end. I'd suggest that is also why 78% of Muslim Americans believe military attacks on civilians are never justified. It's a rate that is higher than that for Protestants, Catholics, Jewish people, Mormons and those with no religion. (more)

Those on the far right inevitably produce quotes from the Qur'an to show that Islam is inherently violent. Unfortunately, Muslims are forbidden from cherry-picking in this way:
"It is... forbidden to cite a portion of a verse from the Qur’an—or part of a verse—to derive a ruling without looking at everything that the Qur'an and Hadith teach related to that matter." (more) In other words, they cannot reply in kind. I can, though.

Author and scholar of comparative religion Karen Armstrong is one of leading 'western' authorities on Islam. Here's how she describes the broader situation today, pointing to fundamentalism (across religions) as the central problem:

"Constantly Muslims are enjoined to respect Jews and Christians, the "People of the Book," who worship the same God (29:46). In words quoted by Muhammad in one of his last public sermons, God tells all human beings, "O people! We have formed you into nations and tribes so that you may know one another" (49:13) -- not to conquer, convert, subjugate, revile or slaughter but to reach out toward others with intelligence and understanding.
"So why the suicide bombing, the hijacking and the massacre of innocent civilians? Far from being endorsed by the Koran, this killing violates some of its most sacred precepts. But during the 20th century, the militant form of piety often known as fundamentalism erupted in every major religion as a rebellion against modernity. Every fundamentalist movement I have studied in Judaism, Christianity and Islam is convinced that liberal, secular society is determined to wipe out religion." (more)

Armstrong's point is important. Who is committing brutalities in the name or religion? In the case of Islam, it is fundamentalists movements such as  Wahhabism from Salafism (more). They were the driving force behind the 9/11 attack, the Taliban, al Qaeda and ISIS (more). There is a huge correlation between fundamentalism and ultra-conservatism; this is true of Buddhists, Hindus, Jews, Christians, Muslims and pagans. If we look across cultures and religions, it is almost always ultra-conservatives and fundamentlists who are behind the trigger.

Sociologist of religion Tex Sample goes one step further. He argues that it is a mistake to refer to a Muslim, a Jew or a Christian as a fundamentalist. He believes that a fundamentalist's fundamentalism is their primary concern, over and above any denomination or faith considerations*.

If he's right, then a white nationalist who wants an ethnostate has more in common with ISIS than they do with Judeo-Christianity. Their position in society and their pathway to radicalisation is probably the same (more). We are talking about people such as Anders Beivik, Brenton Tarant, Dylann Roof, Robert Bowers, John Ausonius, John Houser, John Earnest and Patrick Crusius. If we really want to oppose terrorism then it is our primary job is to reign in these far right fundamentalists.

We find ourselves in exactly the same position as Islam.

A great summary by @Paparoa3 of Gilbert and Elley's article on how the 1990's neo-Nazi skinhead groups were working-class while the 2010's neo-Nazi identitarian groups like Action Zealandia are middle-class seeking to protect their class position.

A class apart: Nazi skinheads and the alt-right - PAPAROA

How do Nazi skinheads relate to the alt-right?


A class apart: Nazi skinheads and the alt-right - PAPAROA

If you've been wondering what we mean when we call Action Zealandia and the Christchurch terrorist "accelarationists", @NicoleMatejic has written a primer on the subject for you.
https://t.co/KguUm9loN2

"We need to know how the attacker was able to come and go from this country with impunity, why his social media activities didn’t raise any intelligence flags, why he was able to get a license and who were his referees." - @kiwistargazer

There is relief. There is anger. And there is still a demand for answers

This morning the Christchurch shooter changed tack and entered a guilty plea to 51 counts of murder, 40 of attempted murder and one under the Terroris...

Thanks to our Aussie friends @3CR, @sexenheimer and @slackbastard for interviewing us on the radio about combating fascism in Aotearoa.
Listen in here: 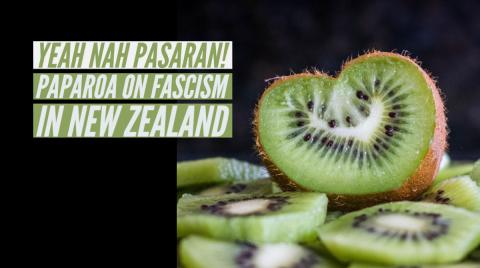 This week we spoke to Roy from Paparoa (as voiced by Karina from 3CR) to discuss fascism in New Zealand and the work they do to combat it.